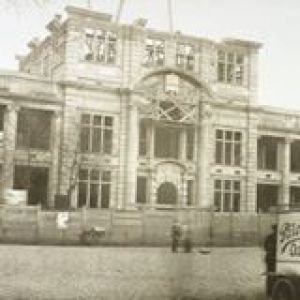 As part of Death Fest, join us for the Day of the Dead party with Our Ladies of Sorrow!

Festival of Ian Smith: A Celebration of Death

An eclectic mix of art, music, performance and installation – all investigating, challenging, confronting or celebrating death. The festival investigates why we often find it difficult to talk about death in our society, and how art and artists can help.

You are cordially invited to Bright Colours Only – the legendary Irish funeral wake that toured from Belfast to Brazil in a hearse! Award winning actress Pauline Goldsmith resurrects her hilarious and heartfelt journey to the edge of oblivion.

The Edinburgh Short Film Festival, Edinburgh’s accessible, friendly and eclectic short film festival,is now in its 6th year! Dedicated and passionate about short film, we’ve brought some of the best contemporary Scottish, UK and international short film to the Scottish capital since 2011.

F.M.I.N. welcome you to an autobiographical one-on-one performance that celebrates the profound emotional impact two women have had on Amy’s life.

To make this show Victoria trained to be a funeral director. Using those experiences and extensive research Ugly Chief looks at the British funeral industry and how we deal with death in modern society.

Whatever your individual beliefs about death, in any scenario you will eventually be unable to express yourself.

The Golden Hour presents … BONE DIGGER in which we give ourselves a fright along with some delight – we’re building a Poetic Haunted House!

A Death Café is a friendly gathering, a chat about life and death over a cuppa. We talk about how views of death affect how we live our lives, and how experiences of life impact on attitudes to death.

Winter Wilson have a fine repertoire of self-penned songs, telling stories of everyday life which often reflect the bigger picture of this life we lead (“Songs for local heroes”, as one punter said).

Master of Cretan lute, George Xylouris, and Jim White, a most innovative and charismatic drummer, come together in an astounding globe-spanning duo.

Author Sian Mackay will be hosted by Summerhall and The Demarco European Art Foundation for the UK launch of her latest illustrated biography Von Ripper’s Odyssey.

Bring In The Spirit

Bring In The Spirit combines the incomparable, sophisticated vocals of Rod Paterson and Kirsten Easdale with the sublime, sensitive accordion playing of Gregor Lowrey.

Shakespeare, His Wife And The Dog

April 1616 – Shakespeare has returned to Stratford a rich and famous man but all’s not well. Why is he so unhappy? Why can’t he sleep? Why is his wife furious with him? Who is Will waiting for and why can’t Anne find the dog?

The virtuoso partnership of England’s premier flatpicking guitarist and “the greatest Celtic harper of our age” (LIVE IRELAND) has by now brought its unique musical vision to twenty-two countries on five continents.

This event is part of the Carrying Stream Festival.

Margaret Bennett is a leading Scottish writer, folklorist. ethnologist, broadcaster and singer whose main interest lies in the field of traditional Scottish folk culture and song.

VortexHealing offers two distinct paths: a path for learning to do deep healings on the body and psyche, and an awakening path.

Born and raised in Manchester, England, Clive is an accomplished singer, musician and record producer.

Lee Ranaldo will hit the road to Europe one more time this year with a clutch of brand new songs from his just completed new album Electric Trim produced by Lee and Spanish multi-instrumentalists Raul ‘Refree’ Fernandez and to be released in the next months.

Fiddle 2016 – Scotland’s largest fiddle festival is celebrating its 20th year – and features over 40 musicians and 50 events in one weekend! At Summerhall, dance the evening away on Friday with the Pentlands Ceilidh Band or Saturday with …

Mairi Campbell is an influential and pioneering figure in Scottish music. Her music has a rooted and powerful quality and her musical interests are wide-ranging: from playing Scottish dance music to pushing the boundaries of the traditional music scene with …

A night of comedy with a difference – headline comedians trying out their brand new material – off notes & off adrenaline!!

The immensely talented Kristin Hersh returns again to the UK (Ireland) for a rare solo tour in support of her critically-acclaimed new double CD and book, “Wyatt At The Coyote Palace” (Omnibus Press) due out October 4th.

This very special concert marks not only the opening Ross and Tom’s mini festival and teaching weekend ‘Winter Trad’ but also the long awaited launch of their debut album which has been a mere 9 years in the waiting!

Summerhall is delighted to announce our annual Christmas Market – This year we are excited to announce a FOURTH room will host more stalls to ensure you are not short for choice.

ANATOMY is a quarterly live art cabaret that crosses mediums and disciplines with a cheeky and playful attitude. ANATOMINIs is their programme of live art for the under 5s, presented in a comforting and welcoming environment.

Modern Studies are a chamber pop band from Glasgow-via-Yorkshire. Their quietly experimental landscape songs are played on analogue synths, cello, double bass, drums, guitars, a wine-glass orchestra and, at the creaking centre of things, a Victorian pedal harmonium.

Beloved worldwide as one of the finest traditional singers of all time, MBE Archie Fisher is recognized as Scotland’s foremost folk troubadour with a career spanning over four decades.

Lau are delighted to announce that Rozi Plain will be headlining our late evening at Summerhall. Rozi (BBC 6 Music favourite, bassist with This is the Kit) has spent an incredible year promoting her latest Lost Map Records release ‘Friend’ and her subsequent live/remix album ‘Friend Of A Friend’ to which Lau’s Aidan O’Rourke contributed a track. We’ll have a stripped-back set from Rozi and Rachel Dadd then dancing into the night with tunes and visuals from Lost Map DJs, plus a couple of Lau-style surprises….

A workshop on alternative approaches to arranging traditional music for mixed instruments, with Lau’s accordion player. Any Ability.

Edinburgh legend Gina Rae (of The Bevy Sisters) leads a group harmony singing workshop, nothing matches the euphoria of singing in harmony with other humans.

Young Shetland Traditional Fiddler Of the Year winner Martha Thomson will teach simple tunes at a slow pace, ideal for those how have recently taken up the fiddle or who play violin already and want to learn some traditional music.

Build Your Own Synthesizer Workshop (Includes Synth you can take home!)

Make your own playable synth and take it home with you! Price includes synth kit and you will be guided through the making process by experts at Edinburgh’s Hacklab.

Join the Summerhall Singers community choir for their annual Winter Concert. Expect an eclectic mix of songs, a live band, mulled wine, minced pies and some Christmas Carols thrown into the mix.

Real Time ‘srepertoire includes not only many songs and tunes from both sides of the border but also contemporary and self-penned material, and to date they have released several albums to wide critical acclaim.

VortexHealing offers two distinct paths: a path for learning to do deep healings on the body and psyche, and an awakening path.

endy’s wide musical interests have led her to sing and play at folk and jazz events worldwide. She has composed music for theatre and film and has vast recording experience.

Girl Band are a four piece noise rock band from Dublin, Ireland. Their live show is known for being loud, intense and energetic.

(Re-)Discover languages through an interactive and playful method combining traditional language learning techniques to acting exercises in a relaxed and friendly environment.

‘Locked In Edinburgh’ opens at Summerhall, making it the fifth escape game in the city – but this one is unique! It’s the only one themed and built around a real room. Discover for yourself the secrets hidden within the …

Have you always wanted to learn to dance like it’s 1939?

The Ceilidh Club at Summerhall

Every Tuesday evening we have the best of Scottish ceilidh bands.

Sunday Assembly is hosted at Summerhall in the unique Anatomy Lecture Theatre on the first Sunday of the month. Doors open 11:15am Feel free to gather in the café both before and after for a chat and a catch up!  The …