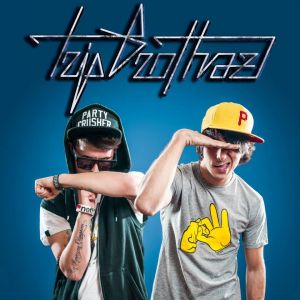 Midget and Larry ,two "brothers" who started travelling into music scene from 2008, when they decided to combine their different musical cultures of hip-hop, rock and electro, to merge them into a single dj set, a sort of breathtaking "scuoticuli- shake your ass"! In 2010 they invented the "delirium party", a monthly night event based in their hometown Ferrara , where they had the honor to host international guests such as: Pink is punk, Gigi Barocco, Stereoheroes,The "s" , Hack the system, Congorock, Gtronic, Zomboy, Firebeatz, Dyro, Gta and many others. Trip Brothaz have been chosen for supporting Cyberpunkers during the first date of the italian epic world tour in Magazzini Generali (Milan) and for the opening of the exclusive one off italian date of 2011 for The bloody beetroots death crew 77 in july 2011. Moreover they've joined as opening act the mighty Steve Aoki in his wonderland italian world tour in august 2012 and in 2012/2013 they played in "Pow Wow Festival" in Croatia(island of Pag) alongside Crookers and Congorock. Their curriculum is amazing since they've also played at Link club (Bologna-Italy) in 2012 supporting Fatboy Slim and then in the same club they've opened the stage for Crookers & Knife party. Last important news this year we all saw their debut in the main room in Cocorico'(Riccione), one of the best club in the world! In june 2013, became part of the project Trip brothaz, Dj smoka, a well known italian dj comin' from the hip hop scene, which scratches during the dj sets of Trip brothaz: another super add to their show!