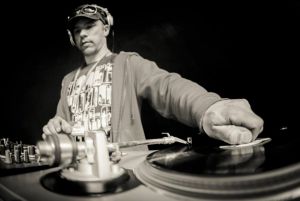 Sascha had his stage debut back in 1998 at the 'Backyard Club', a popular hotspot for excellent electronic music on the worldwide known party-island of Koh PhaNgan in Thailand. After a very short time he became a resident-dj at the 'Backyard Club' and played more than 50 gigs at this unique venue and at their special parties deep in the jungle or on secret beaches all around the island.
He quickly made himself a well known name on Koh PhaNgan, resulting in another residency at the infamous Fullmoon-Party.
The island, this club and all those experiences with internationally mixed up crowds in some really special moments, gave his dj-ing this extraordinary note, which eventually helped him to soon become a well known dj in Germany and many other countries aswell.

After more than 15 years on stage, Sascha played countless gigs in different kind of clubs, parties or festivals all over Germany, in Austria (Vienna,Salzburg), Switzerland (Zuerich), Italy (Rome), Netherlands (Amsterdam), Israel (Tel Aviv), Indonesia (Bali), Thailand (Koh PhaNgan/Koh Tao/Bangkok), Hungary and many other places.
Also his gigs on the techno stages of well known festivals such as the Fusion Festival or Wonderland Festival proved his great variety.
His recordbox always contains many different styles which gives him a lot of space to bring in fresh influences and new ideas.
Even if rooted in progressive house, he's not limited to one particular style as he also features the deeper sides of tech-house, minimal techno, minimal electro and other sounds with that certain deepness or progressive feel, he's known and loved for.

In 2008 his debut EP 'Never Trust The Drugweib' got released on Dezign Music from Greece. The track revealed Sascha's clubby side and gained him his first recognition as a producer.
Further releases followed quickly and his first vinyl release, a remix on 'Tomic - Taktgefuhl' by Fraud Recordings (Germany), made it together with the original to No#1 on the Juno Records (UK) Progressive House charts.
His second EP 'Plateau Playground' got released on Attitude Recordings from Canada and took a deeper electro-tech direction.
Appearances on well known labels such as Plusquam Division (Ger), Baroque Records (UK) and Twisted Frequency (UK) followed and there are more to come.