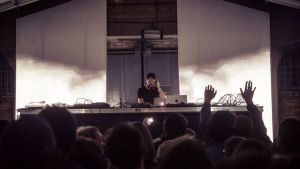 ony Scott has been producing electronic music since the early nineties under various pseudonyms, but with Edit Select he has found his forte. His approach to production and editing has gained him a reputation of being a perfectionist with a very healthy back catalogue that includes the classic Bauer on Ostgut Ton , Asperity ,The Sliotar , Surface to Air & Debut Lp Phlox on Prologue .

Newer material in 2016 so far has brought How We Fall , Breathe In Exhale , Loop Continue & collabs with Mike Parker & Antonio Ruscito forthcoming watch this space .

With remixes of VCMG, Speedy J,Mike Parker, DaDub , Chris Liebing, Mark Broom , his highly acclaimed remix of Slam - Cirklon Bells + collabs with friend Dino Sabatini, Giorgio Gigli and Antonio Ruscito this promises to be a pivotal time in his musical career. As a dj he admits to being very inspired by Andrew Weatherall and Dimitri from Amsterdam back in the beginning of the whole techno – E club environment (“for me you have to make a connection with the people when you play .. a good friend described a moment in Berghain when I was playing as it felt like being home”).

In 2007 Tony started Edit Select Recordings which has been a platform for him to release quality EP’s only when the right material finds its way to him. Staying clear of any standards he managed to create a platform known for it’s ethics and timeless quality. The label and it’s Selected Edits sub label features artists like Teste, Mike Parker , Cassegrain, Dino Sabatini, Terence Fixmer, Giorgio Gigli, Lucy, Shifted, DaDub, Pfirter, Deepbass and Mark Broom to name a few.