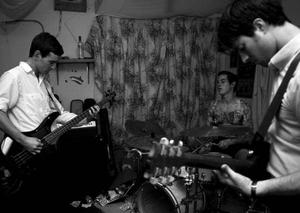 Within a grainy film-still between a summer sunset and the end of times lies the post-punk squall of Weekend. Weekend filter the aggression, tempo and sneer of punk through a wall of reverb, haunting melody, feedback and primitive garage guitar. Formed in San Francisco in late 2009, the band have quickly developed a totally distinctive take on the history of noise rock. Combining noisy guitars, pounding rhythms and dark post-punk vibes in fresh ways isn't easy, but Weekend somehow make it look like it is. Their new album Sports is one of the most assured debuts in recent memory, full of rumbling rhythms, layers of LOUD guitars and most of all great songs that pay special attention to texture and atmosphere, and leaven even the most riotous moments with unexpected shards of melody. "Coma Summer" kicks things off in stunning fashion, an epic slice of noise/gaze that stands tall with No Age's best power-drone. "Youth Haunts" is a new version of a tune from their long sold-out 10" single on Mexican Summer and shows off the band's darker, more tribal side. "Monday Morning" is a dreamy noisescape, a perfect lead-in to the driving, punky "Monongah, WV," which is blessed with a chorus melody a lot of straight pop bands would kill for. As the album continues, it takes in such touchstones as the the chaotic psychedelic noise of groups like Skullflower and Terminal Cheesecake, and the scything racket of post-No Wave noise bands DUSTdevils and Sonic Youth. "Age Class" storms along like classic Killing Joke, and "Veil" is an echoey tune that builds and builds to a smashing coda, trailing off into spectral trails of feedback and incidental static. "End Times" is power-pop as interpreted by "Feed Me With Your Kiss"-era MBV, an amazing mix of melody and racket that perfecting encapsulates what Sports and Weekend are about. "Afterimage" and "Untitled" wrap up the album on a high note, a crescendo of pounding, relentless power. www.myspace.com/weekendmusic