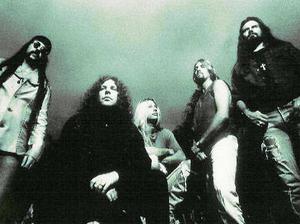 Trouble was formed in 1979 by vocalist Eric Wagner, guitarists Bruce Franklin and Rick Wartell, bassist Sean McAllister, and drummer Jeff Olson. Drawing from Black Sabbath for inspiration (with occasional nods to the psychedelic sounds of the late 1960s thrown in for good measure), the band used gloomy down-tuned riffs and spiritual, often openly religious lyrics, which quickly earned them the dubious "white metal" tag.[1] The band toured throughout the Midwest during the early 1980s before signing with Metal Blade Records and releasing their eponymous debut (later referred to as Psalm 9) in 1984. The Skull followed in 1985 and reflected singer Wagner's struggles with substance abuse as well as the growing turmoil within the group. This led to the replacement of bassist McAllister with Ron Holzner and the departure of drummer Jeff Olson, who had decided to become a preacher. Dennis Lesh was drafted as his replacement for 1987's Run to the Light. In comparison to earlier recordings, the critiques thought Run to the Light was "disappointing". Ted Kirkpatrick played drums during Trouble's Run to the Light tour before he went to form his own band, Tourniquet in 1989. A three year hiatus followed. Just when it seemed that Trouble's fortunes had run out, the band was snapped up by Rick Rubin's Def American Records for whom they recorded another self-titled album (Trouble) in 1990 with Rubin producing. More experimental than previous efforts, the album (featuring new drummer Barry Stern) expanded upon the group's tentative psychedelic notions while not abandoning power chords. The group embarked on a year-long tour and returned to the studio. In 1992 Manic Frustration was released, delving into Beatlesque psychedelia and featuring some of Trouble's most aggressive, energetic performances ever. But when the album still failed to connect with a wider audience (due perhaps to the grunge revolution that made metal a bad word in 1992), it seemed that Trouble had apparently missed their last window of opportunity. Ultimately dropped by their record company (that by now was experiencing financial problems of their own), the band issued 1995's Plastic Green Head through the Music for Nations label. But despite the return of founding drummer Olson, the album's impact was noticeably dulled by a badly concealed weariness. Vocalist Eric Wagner would quit the band soon after (going on to form Lid). Though Trouble had been on hiatus ever since, rumors of an eventual re-formation persisted. On January 26th of 2002 the band took the stage in Chicago once again. Eric, Bruce, Rick, Ron and original drummer Jeff Olsen took to the stage to perform a short set. Since then, the band has been out and about in the Chicago area playing local one-off gigs and headlining various metal festivals while working on their upcoming album. In 2005 they played in Stockholm, Sweden where they recorded the live DVD Trouble - Live in Stockholm. In February 2004, Dave Grohl of Nirvana and the Foo Fighters put together a tribute to his metal roots by assembling a who's who of metal with his Probot project. The disc featured various vocalists from Dave's favourite metal bands singing on tunes that he recoded the music for. Eric Wagner sang on the track "My Tortured Soul". Dave Grohl wrote in the liner notes for Probot that buying Psalm 9 was like buying Sgt. Peppers. Last year bass player Ron left the band and was replaced by Chuck Robinson. In 2006, former drummer Barry Stern died. Their new album, Simple Mind Condition, was released on April 3, 2007 by Escapi Music. An unplugged album will be released at a later date. They toured Europe and USA in support of that album.www.newtrouble.com