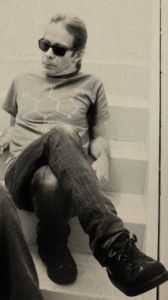 Tim Reynolds (born 15 December 1957 in Wiesbaden, Germany)[1] is a Grammy nominated [2] multi-instrumentalist known as both a solo artist and as a lead guitarist for the Dave Matthews Band. One reviewer has declared Reynolds 'an under-rated master'.[3] Reynolds plays the guitar, piano, sitar, drums, violin, bass, keyboards, ethnic percussive instruments, solo djembe, harp, uses drum machines for special effects, and sings,[4] although his performances are primarily instrumental rock music. As well as being the founding member of the band TR3, he is one of the musicians who performed at "Miller's", in Charlottesville Virginia, befriending and encouraging the bartender, a young Dave Matthews, to form a band of his own, introducing him to local musicians, several of whom make up the Dave Matthews Band. While Reynolds declined the offer to join as an official member, he recorded and toured as a sideman with the Dave Matthews Band from its inception until late 1998, rejoining them as a permanent member in June 2008.[citation needed] He often tours with Dave Matthews as an acoustic duo, in addition to performing as a member of Dave Matthews & Friends. http://www.timreynolds.com/