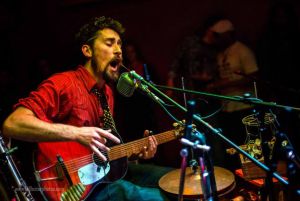 Matt Lorenz [The Suitcase Junket] was raised in Cavendish, Vermont, the son of schoolteachers. He learned to sing by copying his sister Kate; the siblings are two-thirds of the touring trio Rusty Belle. Lorenz graduated from Hampshire College in Amherst, Massachusetts, in 2004, having taught himself to throat-sing, inspired by a South Indian cooking class. On moving day, he pulled a guitar, filled with mold and worse for wear, from a dorm dumpster. He fixed it up and started pulling songs out of it. That was the beginning.
Since then, The Suitcase Junket has built a powerful fan base in his native New England and far beyond. Festival plays -- past and forthcoming -- include Mountain Jam, FloydFest, FreshGrass, Green River Festival, Hardly Strictly Bluegrsas, Joshua Tree, and Winnipeg Folk. The Suitcase Junket has combined streams of 1.25 million on Spotify and was named to Spotify’s Best of 2016 Folk & Americana and Blues & Roots Rock playlists. Lorenz caught the attention of National Public Radio who chose his video session for "Earth Apple" from his 2015 album Make Time as one of the year's favorite sessions. His music puts him in the company of artists working the border of Americana and rock -- Shovels & Rope, M. Ward, Edward Sharpe & The Magnetic Zeroes, Sam Amidon, Alabama Shakes, and The Record Company.