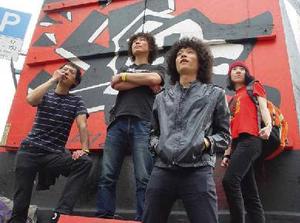 At the centre of the China's burgeoning rock scene is Beijing, and at the centre of the capital city's rock scene is Subs, whose screaming garage-punk rock is the most sought-after live experience in the country. Subs have risen quickly through the rock ranks based on their reputation for riotous live sets that are explosions of pure energy rare to the Middle Kingdom. Inspired by bands such as the Hives, Fugazi and the Yeah Yeah Yeah's, Subs' brand of garage punk rock makes a distinct musical mark. The band's live performances feature vocalist Kang Mao's jumps, wails, dives and screams supplemented by the rest of the band's equally abundant energy. A second trip to Europe is to occur in October 2005, the result of an invitation to the Amsterdam China Festival, and plans are in the works for a return to Scandinavia in 2006. http://www.chaile.org/subs - SUONANO: Me 13/09 - TBA Gi 14/09 - TBA Ve 15/09 - MADLY PUB, Castelnovo, Piacenza Sa 16/09 - JACK THE RIPPER, Roncà, Verona Do 17/09 - TBA

Tutti gli eventi per the subs