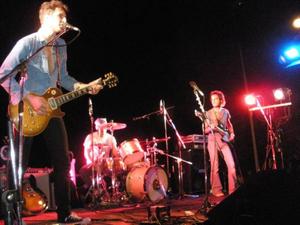 The story of The Shoes begins back in May 2005. Guitarist and singer Elio Di Menza wanted to form up a trio which was to follow in Cream and Jimi Hendrix Experience's footsteps. Together with bass player Pierluigi de Pierro and drummer Valerio Scollo, the band recorded a demo that won praise from the music circuit in Taranto, the band's home town. The fair success of the demo led the band to play its first gigs in local bars, where The Shoes mixed blues with psychedelic music and audiences were blown away by its picturesque performances with acid and powerful sounds. After a few months, Valerio left and drummer Lorenzo Velle joined the band, recording the first album of the group which was played live. The band later played in several concerts all over Italy: the experience made the band develop more mature sounds. The band changed once again its members when bass player Marco Pizzolla and drummer Andrea Basile joined The Shoes. Thanks to this new line-up the band acquired more expressive freedom and improvisation abilities that are already evident in the band's latest tracks. www.myspace.com/shoesrockband

THE SHOES è presentato in Italia da GO DOWN RECORDS

Tutti gli eventi per the shoes