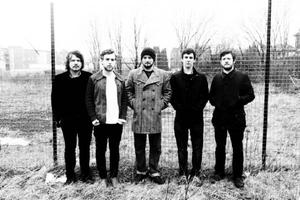 Hailing from Fife, Lanarkshire and Ayrshire, the band formed in late 2009, after meeting through music college and mutual friends in Scotland's musical capital, Glasgow. Finding early common-ground in the belief that modern folk music can be powerful without being po-faced, the band locked themselves away to write their first wave of songs together, the results forming this debut EP release. Whilst being young enough to have no comprehension of life before the internet, common influences ranging from the sixties baroque influenced The Left Banke, to the experimental instrumentalism of Godspeed indicate an already impressive awareness of a deeper landscape than their years allow for, and as noted by the Scotsman earlier this year, who described them as “...a band that writes illustrious music whilst their admirable naivety shines through,” these young tykes are just getting started. Already playing to consistently large quantities of clued-up music kids in their adopted hometown, including a headline spot for the now-legendary Detour nights, the band have since gone on to play to a packed out T-Break tent at this summers T in the Park, and were invited to perform to a glamorous crowd of almost 2000 amongst the burlesque troupes of this years wonderfully vaudevillian Club Noir Christmas night at Glasgow's O2 Academy. Despite the subtlety of their music their live performances fizz with power, with violin-toting frontman Mark Brendan Farmer described by one prominent blogger as “as intense a frontman as you`ll see this side of Nick Cave”. However, with radio play from the likes of Tom Robinson and Gideon Coe, the Culture Show's John Robb stating “their sound is utterly original and the band is pure genius” and taking in a successful first-time tour of Holland along the way, it seems likely the Scottish kids won't be able to hold onto their little secret for much longer. Expect detailed 4-part harmonies, slowly building over a thunderous rhythm, joined by multi-layered violin, cornet and guitar, and a refreshingly unpretentious take on the modern folk genre. This debut EP is an introduction to a band with a busy year ahead, and one that is not to be missed. www.facebook.com/theseventeenthcentury