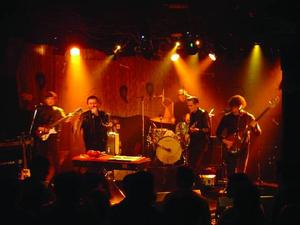 (GARAGE-PUNK - GERMANY) Starting in '93 with Hanes on drums, Steve on vocals & organ, Diego on bass-guitar and Simba on guitar the Satelliters played trashy sounds influenced by bands like the Sonics, the Kinks and 80's bands the Miracle Workers, Fuzztones, Chesterfield Kings or the trash-gurus Mummies. Soon the band started to develop their own interpretations from trashy to originated 60's sounds. In this first period the Satelliters released the singles "Psychedelic Sounds of…", "Oh Yeah", "Kinks of the Universe" and "Journey to tyme" housed in a style-ful reproduction of the hard-to-find Kenny & the Kasuals LP "Live in the Studio Club". In 1998 Technicolour F left the band just two months before their US-westcoast tour, then Zoltan joined the team on bass-guitar and Diego learnt to play guitar!! As a result of the line-up change the Satelliters recorded "What`s up with Timothy Dee?". Anyway this line-up existed for only one year when Zoltan got heavy physical problems which led him to quit the band www.thesatelliters.de - SUONANO: Ve 17/03 - MADLY PUB, Castelnovo, Piacenza + MOJOMATICS_Sa 18/03 - BAR MAYER , Desenzano, Brescia - INFO: BLITZSTUDIO Artwork & Management - Via Don Gnocchi, 14/a - 37010 Affi (Verona) tel/fax 045/6261364 - 347/9330460 - 347 0603197 - 348 4075671- info@blitzstudio.it www.blitzstudio.it

Tutti gli eventi per the satelliters