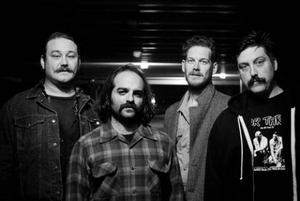 Purveyors of Western Thrash, The Pullmen, Celebrate The Release of Pine Ridge. Having spent much of the last two years dotting the country with a litany of artists that run the gamut from skate punk to surf soul, Ventura County's The Pullmen, unleashed their studio debut, The Western Score. Resonating with both fans and critics as a magnificent mutation of real western twang with a blue-collar punk ethos, the unconventional combination of stylistic brash won a discerning cross section of followers few could reach. From Wanda Jackson and Donavon Frankenreiter to Guttermouth and Riverboat Gamblers, the range of The Pullmen resulted in non-traditional pairings going off without a hitch. In the wake of road realizations and long nights bedding down after a bottle or two, The Pullmen continue their narrative with the follow-up EP, Pine Ridge. An amalgamation of working class poignancy fused with lush, layered instrumentation, make for a collection of songs that harness equal parts catharsis and calculation. Somewhere between Lee Ving and Clint Eastwood, The Pullmen balance the art of storytelling with the spontaneity of rock n roll release. There are no contrived instances of dramatic change, no forced moments of contrived emphasis. Western thrash is personified as frontman Chuck Fang belts a signature death rattle that remains uniquely haunting. Combined with the unwavering cadence of Erin Sidney behind the drums and Strong and Kash helming the strings, The Pullmen fundamentally remain Ventura rockers infatuated with the solitude, seclusion and maybe even the senility of the Sergio Leone-esque West. http://thepullmen.com/

Tutti gli eventi per the pullmen