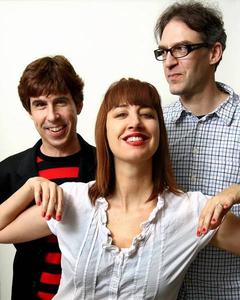 Kim Shattuck formed the Muffs with bassist Ronnie Barnett, drummer Criss Crass and Melanie Vammen in 1991. After two singles for indie labels Sub Pop and Sympathy for the Record Industry in 1991/92, which generated a large underground buzz, the Muffs were picked up by Warner Bros and subsequently released their powerful eponymous debut album in 1993. Shortly after, Crass left the group and was replaced temporarily by drummer Jim Laspesa for the tour. After switching to Reprise Records in 1994 and after a year of touring in venues throughout the world, the Muffs headed back into the studio to record the follow-up, Blonder and Blonder released in 1995; now a three-piece due to Vammen's departure. Right before recording Blonder and Blonder, ex- Redd Kross drummer and longtime Muffs friend Roy McDonald joined the group. Happy Birthday to Me followed in 1997 and two years later in 1999 Alert Today, Alive Tomorrow was released by Fat Wreckords; a rarities collection, Hamburger, appeared in early 2000 on Sympathy for the Record Industry... The Muffs released their new CD Really Really Happy on Five Foot Two Records during the Summer 2004 and toured the US and Japan later that year. Guess what, We are currently writing and about to record a full length record! Did you ever think that would happen again? Well it is. Right now! May 30, 2010 http://the-muffs.com www.myspace.com/themuffs

Tutti gli eventi per the muffs