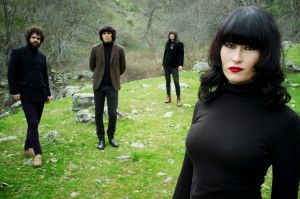 THE LIMBOOS (Madrid, Exotic Rhythm and Blues) The Limboos were born a little less than a year ago with the humble intention to give some color to R&R scene of their adopted city, Madrid. Mission accomplished! Their sound, aptly described as “Exotic Rhythm and Blues”, is a reflection of their obsession with the best black music of the 50s and a passion and exuberance for the development of the rich exotic flavors from countries with low or no democratic tradition. While it all sounds like fun, their songs and live shows are a serious matter to be reckoned with. In their debut recording, 'Not A Soul Around / Space Mambo' 45, the group has chosen to present a slab of greasy R&B on the A side. This is coupled with a B side instrumental that could only be described as “Intergalactic Cubanismo” and very well might shock Mickey Baker and leave him fleeing for his rocket ship to escape to Havana. Produced by Mike Mariconda. The band will release their debut album 'Space Mambo' (Penniman Records Lp/Cd) on october 1st 2014. This album plays like a sampler that showcases The Limboos in a variety of songs and styles, including not only straight Rhythm and Blues but also their own Latin-tinged trademark sound. The exotic flavor that permeates the songs and their exciting live-show have made The Limboos something unique in today's music scene. www.facebook.com/TheLimboos

Tutti gli eventi per the limboos