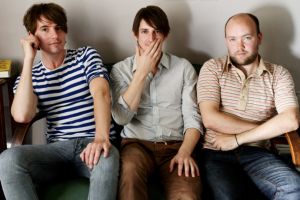 Next week, the Leisure Society release their fourth album, The Fine Art of Hanging On. This time, the acclaimed (and award-winning) indie folk group have delivered an accidental concept album, if such a thing exists.

“The Fine Art of Hanging On is a recurrent, linking theme, although this wasn’t an intentional concept album,” according to singer and songwriter Nick Hemming. “It’s about clinging to something – be that a relationship, a career, or life itself. All the way through writing the album a friend of mine was battling cancer. I reached out by sending him the rough demos of this album. By giving him this access to the work in progress and by him giving feedback, we formed a close bond. Sadly he lost his battle, but his input and presence is there in the album.”