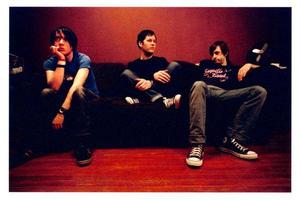 "The Gamits are the Brett Favre of punk rock." Think about it. When The Gamits disbanded in 2004, they went out on top. At a sold out show in Denver, CO, they bid farewell to the city, the fans, old tunes, and new classics from their second full-length entitled Antidote. Over the 10-year lifespan of the band, their music had matured from a pop punk band to that of a melodic rock trio that drew from varied influences with intricate guitar work, thoughtful lyrics, and beautifully simple song structure. In 2009, it all started over with a phone call from Japan. The country that once embraced The Gamits wanted a reunion tour. With the idea planted firmly in frontman Chris Fogal's mind, he called Scott Weigel and Forrest Bartosh to pick up the bass and drum duties and take a nice paid vacation to Tokyo. But the idea grew from a simple reunion tour into a brand new album. "Parts" was completed in July at Fogal's Black In Bluhm studio in Denver. Released in Sep/Oct 2010, this album is the next step forward for a band who may not have played together for a while, but must have been listening. The foundation of melodic rock is still the same, but this time the album takes on more of an edge. Vocally, the album is a departure from Fogal's sticky sweet tone of the past, and walks toward a gruffness reminiscent of Blake from Jawbreaker or Eric from Dillinger Four. Musically, all the hooks are there, but they still leave room for texture through time changes and hard rock beats. The album is woven together through lyrics that take the listener inside multiple personalities and tortured souls, past and present, suicidal and celebrating all at the same time. PARTS is the logical next step for a band that every Gamits fan loves and everyone else hasn't heard yet. Check out our website at www.thegamits.com www.myspace.com/thegamits

Tutti gli eventi per the gamits