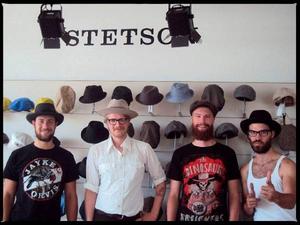 Ever since they started out in 2006, the Dinosaur Truckers have toured excessively all over Europe and gained the reputation of a definite can't miss live band, forcing steaming atmo and dripping sweat at any given show. Whether they play at blazing speed or temporarily slow it down for a somber ballad, they're not the ones to sing about sweet country sunshine but offer up the pure, uncut, unadulterated form – potent and dangerous and not for the faint of heart. Although rooted deep in American music, the Dinosaur Truckers certainly aren't just yet another folk act. This four piece band merges a wide range of styles: From fast-paced bluegrass to country, punk, rockabilly and at times even mariachi impact, they display tremendous breadth of sound and influence and deliver with giant energy. Now, after hundreds of shows and two full length albums – 'Songs For Homefolks' (2008) and 'Down This Road' (2009) – that both won unison praise from the music press („The result: excellent!“ / Melodie & Rhythmus Magazin 11/08, „One of the highlights in 2009” / Dynamite! Magazine 06/09), their new selfentitled album was released in April 2013 and again was critically acclaimed. So if those four guys come anywhere near your hometown, do yourself a favour and make sure to check them out. http://dinosaurtruckers.de/ www.facebook.com/dinosaurtruckers