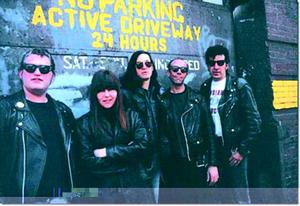 The A-Bones is a garage rock band from Brooklyn, New York. Their name was derived from a song by The Trashmen. The band was formed in 1984 by vocalist Billy Miller and his wife, drummer Miriam Linna; the couple had previously been the editors of the pop culture journal Kicks and later launched Norton Records.[1] The New York Times described the band as "dedicated rock revivalists," noting "The A-Bones include Miriam Linna and Billy Miller, proprietors of Norton Records, which worships rockabilly, 1960s garage and anything having to do with that most cartoonish rock archetype: the juvenile delinquent in a leather jacket."[2] The band also features Mike Mariconda, Mike Lewis (a founding member of both the Lyres and Yo La Tengo), Bruce Bennett, Marcus "The Carcass" Natale and Lars Espensen, with Miller, Linna, Bennett, Natale and Espensen playing on the bulk of the band's recordings and for most of the band's touring life. www.myspace.com/theabones

Tutti gli eventi per the a-bones