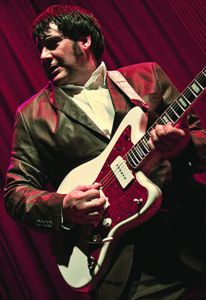 He has entered the beach music scene in 1994 playing in a few local bands in Livorno, Italy. Switching between Italian music and Californian classics he soon found out his own direction towards surf and beach music by discovering Dick Dale, Jan & dean, Beach Boys, Astronauts, Challengers, Centurians, Ventures, Surfaris, Belairs, Lively Ones, Chantays, Pyramids, Trashmen and so on. Fortunately the local music scene was pretty active in the mid 90s even if there was very little space for original music. On 1997 Lorenzo formed the Pipelines that soon become a premier Beach Boys & California music band in Europe playing more than 1000 shows during the next 10 years! The contacts with other surf bands have been very frequent sharing the stage with friends like Bradipos IV, Crashmen, Charades, Los Venturas, Cosmonauti, Wet-Tones and more. While the Pipelines were still very healthy, on April 2002 Lorenzo launched SurferJoe.it, a web portal to promote the Italian surf music scene, which truly started his business as booker and event manager. Since then many events have been organized in the name of Surfer Joe Music including 5 edition of the Summer Festival, now acclaimed as the world's #1 surf music event (www.surferjoemusic.com). On 2003 Lorenzo formed an instrumental surf band called the Speedsurfers, a very nice combo mostly dedicated to original compositions with a few classics in the set list. Speedsurfers did just a few shows with a good local success, but on 2004 Lorenzo left Italy and moved to Antigua, in the Caribbean. On 2005 Lorenzo formed the Wadadli Riders with his wife Niki on bass. The band was the very first surf band ever born in the Caribbean and during the next 5 years the Riders have been touring Antigua, Europe and the US quite successfully with Lorenzo switching between drums and guitar. Today Surfer Joe is a strong reality in the surf music community worldwide and Lorenzo is continuing writing and producing his own instrumental music. In contact with almost any surf band on the planet, Surfer Joe wants to diffuse this fabulous music genre with its simplicity, strength and incredible energy! Thanks Dick Dale & Paul Johnson for giving us surf music! www.bosscombo.com www.facebook.com/surferjoebosscombo