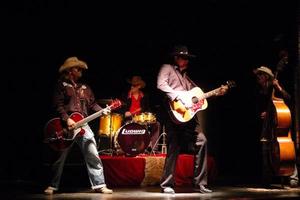 Lieutenant SLAM and Private HOWIE sing songs about gals, booze, jail and the slammer over endless highways (way over the speed limit). January 2006: A leap in the dark, SLAM and his single employee Howard B. Benson play faster than their brains work. Concert after concert. Switzerland, Germany, Netherlands, Czech Republic. They play on boats, on ski sloaps, in sleazy punk clubs and in country bars, sober or jagged, but always with almost supernatural devotion. Spring 2007: The mob exclaims for an album and they shall get it. Two additional cowboys join the band. In a two days live recording studio session they produce their first album "Vicious Songs". Ultra fast Bastard Speed Country songs - light-years away from the shalllow Nashville-Mainstream - designed to quicken the outlaw heart in you. Summer 2007: After a further Europe tour, it’s time for business talk. The band signs a record deal with N-Gage Productions. A video clip for “Shotgun Rag” will be shot and even the first gigs for 2008 will be booked. Who ever loves Johnny Cash, adores Elvis and thinks Motörhead are cool shouldn't miss out on these guys. It’s a long time ago since country music was that much fun! Quote: Fernando von Arb/Krokus: The most Unswiss Swiss band for years, amazing! www.grandslam.ch www.myspace.com/slamhowie