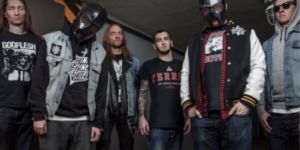 SMG’s lyrics, music videos and graphical art demonstrate the strong connection of the band to the world of street-culture including graffiti, skateboarding and BMX and also praise the mighty Bear-Tsar – the band’s mascot and the ruler of Siberian Hell who leads the army of headbangers and metal warriors.

Siberian Meat Grinder was formed in 2010 by the former members of different Russian punk, hardcore and rap bands, including such prominent Antifascist acts as What We Feel, Razor Bois and Moscow Death Brigade. The band has released two albums "Hail To The Tsar" (2012) and "Versus The World" (2013) - both can be found on bandcamp: