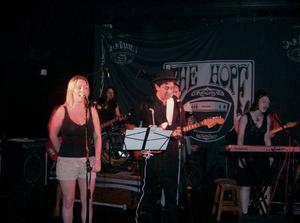 Scarlet's Well are a British band noted for their exceptionally wordy and multi-layered lyrics, heavy with literary and other allusions. They were founded by Bid, the Indian-originated singer and songwriter of The Monochrome Set, after the latter band amicably split (for the second time), and released their first album in 1999. Throughout their career their releases have appeared on the Spanish label Siesta Records. Originally intended purely as a studio project, and as an "atmosphere" more than a band, Scarlet's Well have been performing live since 2004. Their albums feature various, mostly female, vocalists along with Bid himself, who also writes most of the songs, and tell a loosely-defined story set partially in a fictional village in South West England called Mousseron, partially off the coast of South America and partially in "the Underworld". The instrumentation is somewhat folk-influenced and includes unusual instruments (in pop or rock music) such as bouzoukis and accordions. www.scarletswell.co.uk www.myspace.com/scarletswell