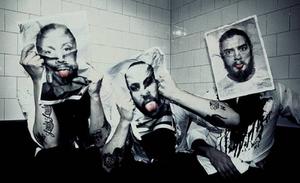 Like a bat shot out of hell. A kick in the gut when youʼre already down. Addictive, straightforward, tough and ironic. All at once. Satan Takes A Holiday grabs the rocker by the neck and does not let go until you shake your butt to the point of bevarage-spill. Satan Takes A Holiday became the talk of the down when they released their self-titled debut album late 2009. A few months later they were nominated in the Best Rock category at the swedish P3 Guld Awards, and the singles “Missy” and “Heartbreaker” were played regularly on the radio. With their mix of rock'n'roll, sixties' garage and punk rock, Satan Takes A Holiday are seen as one of the best live bands in Sweden and the gig bookings have been piling up. The band have been regulars at festivals, as well as stints with Mustasch and Juliette Lewis among others. The second album “Who Do You Voodoo” is released March 2012, preceded by the single “Karma Babe” in February. An extensive tour is planned for spring and summer 2012. SATAN TAKES A HOLIDAY: Fred Burman – guitar, lead vocals Johannes Lindsjöö – bass guitar, vocals Svante Nordström – drums, vocals http://satantakesaholiday.com/ http://www.facebook.com/satantakesaholiday