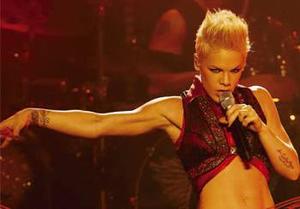 PINK - I Am Not Dead The thing about MTV-tailored pop music is it has always been a case of brilliantly written songs delivered without substance. They sound catchy and memorable, minus the cheese factor, but essentially the messages and those delivering them, are paper-thin. Pink delivers the one thing that none of her contemporaries even go near: balls. Pink provides the substance that the others do not. With an 'everyman' look at the world she is very much a part of - Hollywood parties and Hollywood wankers - she is as critical of the celebrity world's shallowness as anyone not elite enough to be a part of it. Because she is a part of it, Pink's criticism is particularly valid and refreshing. In keeping with the MTV-pop thing, her songs are also catchy as hell, so the combination is potent and fun all in one hit. Lead single Stupid Girls swipes at the Jessica Simpsons and Paris Hiltons of this world with witty precision, and a similar disdain drives much of the record. There are also some tender moments (Pink collaborates on a song with her father for instance) and each tune succeeds on its individual merits. She's a much-needed anti-hero in the pop world, and Pink's mark is one of irreverence and realism... two things the glitzy, bullshit world she is part of don't take kindly to. Does she care? 'Fuck no' as she says herself. This sista's doin' it for herself. www.pinkspage.com Unica Data Italiana!!!