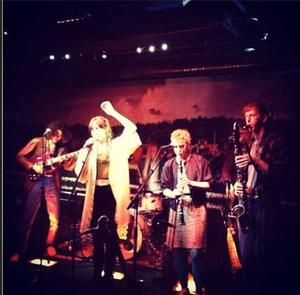 Oh My O began playing together in 2009. That year, all the members were living in the small town of Bollnäs in northern Sweden, and studied music together. Living very close to each other, the band quickly became tight and coherent and with a playfulness they improvised themselves up to their own specific sound. 2012 they released their first album Sail Away, and began collaboration with Comedia / Despotz Records / Playground Music. With singer Olivia Sandell Billström's compositions as a starting point, Oh My O has developed a completely unique sound, creating unpredictable pop music with imaginative arrangements. The two clarinets in combination with electric guitar/ lap steel, bass and jazz influenced drumming, creates exciting sounds, rarely heard neither on the Swedish or the international music scene. The band's melodic pop has been hailed for its wayward, personal ideas and an English music journalist has described their music as “Scandipop with a twist”. On their debut album Sail Away, Oh My O is exploring rarely walked paths that lead the group on exciting and innovative musical journeys and adventures. The album was recorded by Christopher Wernqvist in Molotov Studio, Stockholm and mixed by Håkan Sörle (The Baboon Show), who for the last years also has worked with Miss Li, Thorsten Flinck, Little Marbles and Stefan Sundström and other Swedish artists and band. In connection with the album release in September 2012, Oh My O made a highly acclaimed mini tour and Sail Away entered at top 40 in the Swedish album charts. The album was preceded by the single Swim which made more than one critic to draw parallels between the song's dramatic moods and “the Scandinavian wave”, represented by artists such as Lykke Li, Ane Brun, and Miss Li a.o., who has all attracted international attention in recent years. In 2013 there will be a series of new releases from Oh My O, starting with the EP ONE: Not Done Yet [Comedia / X5 Music] to be released February 26 on all digital platforms, including iTunes, Spotify etc. www.ohmyo.se