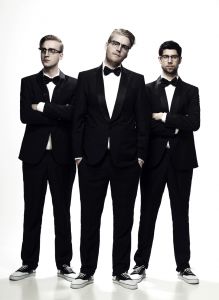 It starts with a deceptively simple accordion riff, but quickly blows open into high-speed territory; Movits! has arrived. On their second album, Ut Ur Min Skalle (English title Out Of My Head), Swedish hip-hop swing band Movits! further explores the eclectic, yet strangely universal sound that made them famous.

The follow-up to 2008’s Ã„ppelknyckarjazz, Out Of My Head continues the fun, but quickens the pulse. Preserved are Movits! characteristic features: quality effects supplied by Anders Rensfeldt, Joakim Nilsson’s blistering sax solos, and lead singer Johan Rensfeldt’s quick tongue and fun—if hard to understand—Swedish rhymes. It’s a great moment when you realize that, although you don’t know what he’s saying, it totally does rhyme.

This is better than a respectable sophomore effort. Out Of My Head improves upon its predecessor by amping up both the pace, and the fun. Lead single “Sammy Davis Jr” is included in both English and Swedish, and it’s tremendous fun to flip back and forth between the two, learning a little Swedish along the way. Both versions are amazingly catchy, make-you-dance tracks (not to mention the rock-out “James Brown moment!”).

“I Andrahand” has a charming retro vibe behind Rensfeldt’s vocal track, which is as slow as this album gets. “Marching Band?” starts with an ear-catching whistle and jumps right into a tuba-backed romp. “Skjut Mig I Huvet” gets a little tough, with sound effects of bombs under an addictive beat. “Balaclavaboogie” features guests Timbuktu and Promoe– not that this song needed help. The urgency in the rollicking beat, backed by the wail of a police siren, makes it irresistible.

Out Of My Head proves that Movits! is no one-hit wonder. Colbert may have provided the bump, but these guys have the skills to run with the momentum. And don’t let the whole Swedish thing throw you—after all, who frets about understanding Gogol Bordello’s Eugene Hutz? Movits! deserves the same chance.