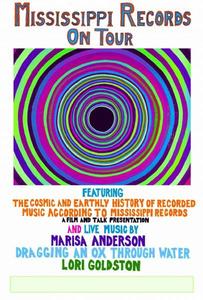 'A Cosmic and Earthly History of Recorded Music according to Mississippi Records' Mississippi Records has a new concoction, this live presentation from Eric Isaacson, is a combination of film, slide show, lecture and soundscape. It instinctively and idiosyncratically illustrates a entire history of recorded music (focusing on Eric's patch, North America!), from the birth of the first star in the universe all the way to the dark ages of the 1980′s. The ultimate intention of this travelling exhibition is to give the audience a sense of wonder; that anything is possible and art is worth doing. Tonally, the presentation navigates into the outer reaches, bypassing academic stuffiness in favour of entertainment value and immediacy. All materials will be from Mississippi Records vast and seldom seen archive of film, music and art. This whirlwind 90 minute sound and visual representation will attempt to sum up as many important points in the evolution of recorded music that can be done in such a short amount of time. Subjects hit upon include - - The cosmic patterns that resemble music generated by stars being born and dying. - The musical patterns in the natural world that work on the same principals as music. - The untold early history of recording technology (including tales of Archeoacoustic technology that allows us to hear recordings from 2,000 years or more ago, cat pianos, the phonautogram which reproduces sounds from dust and much more) - The rise of the blues, rock and roll, and other revolutionary American music forms and their subsequent destruction by the powers that be - Hopeful messages about the future - 45 minutes of incredibly vibrant archival footage of some some the greatest musicians on Earth (as well as some novelties) including Bo Diddley, Rosetta Tharpe, The Collins Kids, Gary Davis, and the Staple Singers. Mississippi Records has produced over 280 releases on LP & cassette tape that crisscross's borders, digging up joyous albums, singles and unheard songs and sounds that where being left under the bed, out in the shed and unloved by most record companies. They have managed to do this on a shoestring budget, without ever advertising or engaging in promotion of any kind & distributing only through DIY avenues. “Much is disputed or simply unknown about the mysterious, iconic label Mississippi Records, but a few facts are clear. Based on Mississippi Avenue in Portland, Oregon, like its namesake record shop, the label has spent most of the last decade releasing and selling fine vinyl-only releases and reissues of roots, gospel and unclassifiable obscurities, alongside essential new music from the lively art-punk scene. Eric Isaacson, one of the three dedicated people running the label, insists, “It's still amateur hour round here.” We are inclined to disagree, but when J. Spaceman describes Mississippi's output as “unbelievably beautiful”, who are we to argue? – BILL KOULIGAS, Drapper Magazine https://sites.google.com/site/mississippicsr/