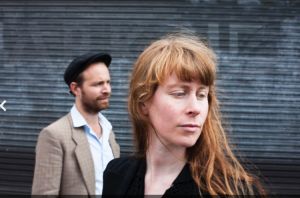 After youthful energy is all spent, when the world closes in and starts to weigh down on our shoulders we look up to see the tightrope-walker precariously, delicately, elegantly, balancing on the distant highwire. The metaphoric thrilling beauty of the heights, paralysing fear of the fall and wistful longing of those stuck on the ground form the lyrical arc of Max & Laura Braun’s exhilarating, yet moodily gentle second album Highwire Haywire. With a beautifully, shimmering sound that retains an edge of melancholy the new material talks about the struggles and pleasures of a generation leaving behind it’s youth, - the passage of time and it’s traces. In their stripped-down folk-pop Laura’s clear and tender voice and Max’s harmonies mingle with fingerpicking acoustic guitars, jangeling electrics, banjo, dreamy pedal steel and vibraphone, upright bass and subtle percussion. With their new album, recorded in summer 2014 primarily in studio live-takes, Max & Laura Braun have taken another confident step forward and created a multi-facetted and pleasantly reserved record. Bio Siblings Max and Laura made music together in their teenage years while growing up together in Germany. Laura up and left in the late 90s to study art in London where she still lives working as a photographer and small-press publisher. Max stayed in Germany, playing with many bands, creating music for theatre and working as a producer in his recording studio. In 2008 however, after a ten year break, Max and Laura wrote their first new songs together again and thus started their new musical collaboration. Since then they have assembled a band of inspired musicians, toured Germany and the UK and in 2012 released their debut-album Telltale (Arctic Rodeo Recordings). Their second album Highwire Haywire is due for release on 06.03 2015 on Interbang Records. Websites: http://www.maxandlaurabraun.com http://www.facebook.com/maxandlaurabraun http://www.soundcloud.com/maxandlaurabraun