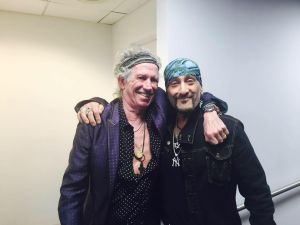 Fans from all over the United States and all Rock and Roll loving countries have been asking for years, DEMANDING, "WE WANT THE DICTATORS!"

The demand was NOT being met.

And then, one day, 3 guys from THE DICTATORS, the lead singer, Handsome Dick Manitoba, the lead guitar player, Ross The Boss, and the drummer, JP "Thunderbolt" Patterson, decided to meet THE DEMAND. They wanted to answer the call. They thought this music, that meant so much to so many, should not be put to rest.

So they went out and got the best, most fun bass player they knew, a man by the name of Dean "The Dream" Rispler, and they added a guitar player with a great punk rock pedigree, a man who wrote songs with and produced albums by THE RAMONES. That man was Daniel Rey.

The Dictators were complete.

Except for one thing....

Since it wasn't the totally original line up the band felt obliged, historically and as a courtesy to members who either couldn't or didn't want to play, to have a slight differentiation name wise between the first wave and the latest incarnation of THE DICTATORS.