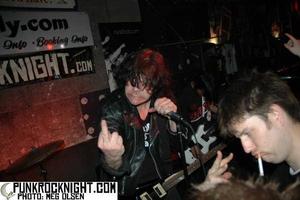 1. M.O.T.O. Raw Power | Criminal IQ Plenty of local albums released this year were more polished and ambitious than the latest from Paul Caporino's long-running punk outfit M.O.T.O., but not one of them was more fun. The two decades Caporino has spent sharpening his hooky pop songwriting, precise eighth-note riffage, and so-dumb-they're-brilliant lyrics have paid off handsomely -- if Raw Power had been released in the late 70s it might now be ranked alongside the best of the Ramones or the Undertones. The 14 lo-fi, high-adrenaline tunes charge by in 34 minutes, and the band's boneheaded shtick (the first two tracks are called "2-4-6-8 Rock 'n' Roll" and "Gonna Get Drunk Tonight") belies a rigorous economy and focus. Caporino gets an impressive variety of shades from a three-chord palette: His snotty bubblegum melodies on songs like "Deliver Deliver Deliver" and "Piano Jazz Radio" can trigger surprisingly powerful swells of emotion. He does goofy gabba-gabba-hey punk rock with the best of them ("Getting It Up for Physics," "Flipping You Off With Every Finger of My Hand"), but his wise guy's take on adolescence is as sophisticated as it is funny -- he can invoke the ache of longing by denying that he feels anything. And on "Primeval" -- less a conventional pop song than a mantra -- he manages to make compelling music by repeating a single line for two minutes. Nothing against all the bands out there trying to guess which kind of punk will get fashionable next, but Raw Power is still gonna sound great in 20 years, when everybody's forgotten about Interpol -- it's rock 'n' roll without a sell-by date.