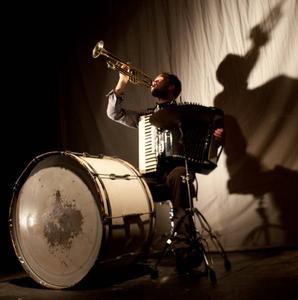 Lonesome Leash is the solo moniker of New Orleans-based songwriter and multi-instrumentalist Walt McClements. Known for previous involvement in Dark Dark Dark, Hurray for the Riff Raff, and Why Are We Building Such A Big Ship?, McClements, as Lonesome Leash, channels all of his musical experiences into a lean and gorgeously messy solo affair. Anchored by the sinuous accordion sound that's become a McClements trademark, Lonesome Leash takes mad aesthetic stabs, incorporating drum loops, lush feedback and brass flourishes, in the end creating a sort of future-rustic musical environment. McClements explains: “I'd always been interested in affecting the accordion to make it sound more like a synthesizer, and more than a synthesizer, as well as including drum machines and electronics into what normally would — or could be — very traditional sounding textures.” Live, the project takes the form of a one man band, with McClements deftly navigating drums, accordion, trumpet and vocals. A spectacle in and of itself, the true achievement is how quickly one forgets the multi-tasking going on, as the arrangements, sounds and words quickly overshadow any thoughts that this may just be technical gimmickry. On debut album I am no captain, released in January of 2013, Lonesome Leash trades in the sort of heavy-breathing ecstatic joy and fatalistic romanticism that pervades New Orleans, but translates to any location and into any language. “Pelican” is a homesick ode to a new wave dance party in a falling-down shotgun house, while epic album closer “Ghosts” will conjure familiar emotions for anybody who has ever endured tense sleepless nights in the company of another. Lonesome Leash is music for the lonely ones; for the triumphant and the nervous; it's the soundtrack to the lives of the mad and magnificent. Lonesome Leash's new EP One foot in front of the other, released in September 2013 consists of five songs written over a 4 month stretch of tour from January to April, 2013. Recorded during a two-day pitstop in Brooklyn to unload ideas, the EP pushes out, in all directions, the aesthetic boundaries set in place by the debut album. McClements again worked with engineer and producer Don Godwin (Callers, REANIMATOR) to situate the songs among disparate but fluid sonic landscapes This finds the EP traveling a vast section of textural ground, where minimalist accordion instrumentals bleed into tense and unsettling lo-fi pop, jagged fanfares punctuate layers of distorted accordions, and driving electronic beats fade into pastoral soundscapes.