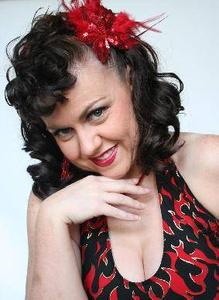 The Little Girl with the BIG Voice! They call her "Little Rachel" because she is only five feet tall, but this petite package packs quite a punch! Little Rachel exploded on to the 1950's rockin' scene in 2000, alongside her sister Caroline, as the exuberant Austin, Texas-based rockabilly duo, "The Casey Sisters". They released two albums on the Swedish label, Tail Records, that quickly earned them a great deal of critical acclaim from 1950's enthusiasts for their strong female harmonies, versatility, and authentic 1950's sound. However, their popularity truly soared after live performances at some of the largest and most well-known rockabilly festivals worldwide, including "Viva Las Vegas" (Las Vegas, NV), "Rockabilly Rebel Weekender" (Indianapolis, IN), "Oneida Rockin' 50's Fest I" (Green Bay, WI), "Rockabilly Rave" (Camber Sands, UK), and "Screamin' Festival" (Calella, Spain). "The Casey Sisters" firmly established themselves as a force to be reckoned with- either on their several tours in Europe, with their wild, energetic stage shows (that often included dancing on top of table tops and bars), or by playing at home in Texas with some of the best musicians the genre has to offer. After four years of riding high with "The Casey Sisters", Little Rachel decided it was time to return to the blues roots of her hometown of Kansas City. She left Austin in pursuit of recording a solo 1950's-style Rhythm and Blues album, to pay homage to some of her favorite artists such as Little Richard, Etta James, Wynona Carr, Little Willie John and Big Mama Thornton. She spent a year researching, writing songs, and learning enough guitar to teach her songs to musicians she would select for her hand-picked all-star band. The much-awaited debut is "'Cause I Feel Good", a power-packed and soulful collection of 14 songs: 11 originals penned by Little Rachel or the amazing Swedish song-writer- her Tail labelmate- Eva Eastwood, and 3 strong cover songs from the 1950's era. She is backed by some of Austin's finest- Tjarko Jeen on guitar (Ronnie Dawson, The Tinstars, Bevis), Beau Sample on upright bass (Cave Catt Sammy), Damien Llanes on percussion (Nick Curran and the Nitelifes, Dave Biller Trio), Matt Farrell on piano (Nick Curran and the Nitelifes; Gary Clark, Jr.), and Dan Torosian (Marcia Ball) on baritone and tenor saxophones. It was engineered and produced by retro sound specialist Billy Horton at the prestigious Fort Horton Studios. The energy, versatility, and authentic 1950's sound that "Casey Sisters" fans associate with Little Rachel is multiplied by her great passion for the R&B genre. It is evident that this is what she was made to do, and she is quickly earning a new fan base that crosses over from not only 1950's music fans, but fans of blues and soul as well. Since the release of "'Cause I Feel Good", critics have been raving. Little Rachel has been featured in numerous publications worldwide including "Blue Suede News" (U.S.), "Blues Revue" (U.S.) "Blues News" (Finland), "Blues & Rhythm"(U.K.), "UK Rock!" (U.K.), "Big Beat" (Finland), "Jumpin' From 6 to 6" (France), "Soul Bag" (France), "RUTA 66" (Spain), and "American Music Magazine" (Sweden). Before releasing her debut album, she had already been booked for several major festivals and attracted the attention of numerous record labels. A second CD, recorded with Spanish jump blues combo "The Lazy Jumpers", is scheduled to be released on El Toro records in 2006, as well as a second pressing of "'Cause I Feel Good". Whether she is crooning a soulful, bluesy ballad or wailling out a frantic rock 'n' roller, she embodies that sound that rock 'n' roll was founded on. Though petite, she owns the stage with a commanding presence and a sexy sass. If you have not had the chance to witness it, you will soon. Little Rachel is out to make a big impression! www.littlerachel.net