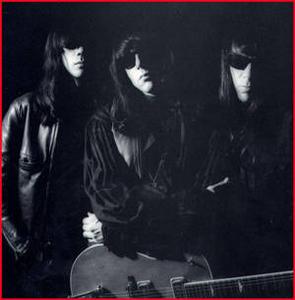 1986 - NYC's Garage kings, The Fuzztones, have just broken up, after an extremely successful record release and subsequent European tour with England's punk pioneers, The Damned. Remaining Fuzztones Michael Jay, Deb O' Nair and Rudi Protrudi spent a good deal of 1986 auditioning prospective future Fuzztones, but to no avail. Deb went off to form Punk/Polka band Das Furlines with Wendy Wild, while Rudi and Michael added "Mad" Mike Czekaj to the line-up and continued the search. After almost a year of auditions, the trio had become disillusioned. They began playing obscure Link Wray covers in the privacy of their rehearsal room, in an effort to amuse themselves until the right Fuzztone replacements came along. The Fuzztones rehearsal space was located in the infamous Music Building, right off of NYC's Time Square. Many popular NY acts rehearsed there and it became customary for musicians to drop in to catch a few tunes by the Jaymen. There was no "surf" scene yet, and in fact, no instrumental rock & roll acts at all. The Jaymen impressed other musicians to the point that they constantly hounded the new band to go out and play some shows. Literally a "tribute" band to the then barely known Link Wray, the band decided to name themselves after Wray's combo, Link Wray & The Raymen. The moniker "Jaymen" being inspired by Michael Jay. Their debut show, at NYC's Southern Funk Cafe, was a huge success, and the band continued to play NY venues from that point on. They began writing their own material, and soon found themselves touring Eastern Canada. Upon their return, they recorded 2 albums worth of material and 1986 licensed it to Germany's Music Maniac label. Still determined to resurrect The Fuzztones, Rudi and "Mad" Mike set off to California. Michael Jay decided to stay behind. The Fuzztones were reformed shortly after, as were the Jaymen. Both bands continued to record and perform, as well as tour. Between 1987 and 1994, the Jaymen had toured Europe 6 times. In 1992, the Jaymen released the first guitar oriented striptease/burlesque LP, "Slow Grind," and consequently became the houseband for the annual striptease convention held at Exotic World, a converted goat farm turned burlesque museum, in the California desert region of Helendale. There they backed the legendary Tempest Storm, as well as other surviving dancers from the burlesque era. By 1994, the Jaymen had released "Seduction," an exotic mix of psychedelia and belly dance music, which they dedicated to one of Rudi's heroes, Korla Pandit, an Indian organist, who's 1949 TV show featured the keyboardist in turban and nehru jacket, gazing hypnotically at the viewer while delivering mesmerizing exotic music on his hammond organ, as projected clouds would float behind him. This line-up (the fifth) consisted of former Fuzztones Jordan Tarlow (Mosrite bass), and Jason Savall (keyboards), began playing live as well, and performed a set consisting of striptease and exotica, featuring strippers (including former Russ Meyer starlet Kitten Natividad) and belly dancer, Misty Lane. Ironically, a later version of the Jaymen, featuring the rhythm section of the Dutch garage rockers The Acetones, went on to back Link Wray himself, albeit without Rudi. In 2000, Link Protrudi toured Germany and Italy, this time with an Italian Jaymen, consisting of two of Rome's The Others. Since their inception, the Jaymen have released 6 LPs, as well as a promo video. www.myspace.com/linkprotrudi And Link Wray, himself, was a big fan of the Jaymen! Link can be seen sporting a Link Protrudi & the Jaymen t-shirt in his recent live video release, "The Rumble Man!"