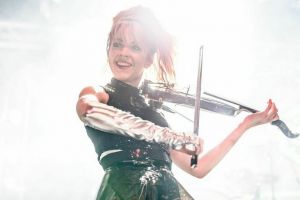 Lindsey Stirling is one of the biggest artist development breakthrough stories in recent years. A classically trained violinist from Gilbert, AZ, Lindsey has entered a futurist world of electronic big beats and animation, leaping through the music industry with over half a billion views on YouTube, Billboard chart-topping hits and sold out tours worldwide.

Lindsey’s self-titled debut album featured twelve original tracks; including the viral smash “Crystallize,” which has racked up over 90 million YouTube views. The album has sold over 300,000 copies in the US without the backing of a major label, and has gone platinum in Germany and gold in Poland and Switzerland. The album reached number one on the Billboard Dance/Electronic Chart and the Billboard Classical Album Chart and also peaked at #23 on the Billboard Top 200.

In May 2014 Lindsey will release her new album called Shatter Me. The album will coincide with a 44-city tour across the US, kicking off in May in San Diego, CA and wrapping in Dallas, TX in July. Lindsey has sold out her last two tours across North America, Europe, Russia, and Asia and in 2013, she headlined a sold out 46-city tour across the US and Europe.

It is hard to believe that Piers Morgan told Lindsey Stirling the world had no place for a dancing dubstep violinist. But being voted off 2010’s “America’s Got Talent” at the quarterfinals turned out to be the best thing that’s ever happened to her. Rejection simply strengthened Stirling’s resolve to be herself. “The same reasons I was told I wouldn’t succeed are the reasons people travel hundreds of miles to see me now,” she laughs. “Because it’s different. Because it’s something you haven’t seen before...” Since the show, Lindsey has flourished as an artist.
http://lindseystirling.com/ https://www.facebook.com/lindseystirlingmusic https://twitter.com/LindseyStirling