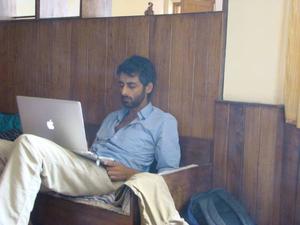 Suryakant Sawhney is a New Delhi-based electronic music artist who performs under the name Lifafa (Urdu for “envelope”). He's a relative newcomer to beat production, having played the guitar or other non-laptop-based music in bands like PCRC (Peter Cat Recording Co.) until he became entranced by the twilight grooves of offbeat dubstep artist James Blake in his his travels to Europe and the United States. Lifafa's music hovers in the zone of many other post-Blake artists, but strays to reaches as upbeat as lo-fi disco, as cerebral as IDM, and as reflective as ambient. A “Chudail” or “churrel” is a vengeful South Asian female ghost/witch spirit. Lifafa playfully describes his music as “chudail-step.” His after-hours music is haunted by ghostly vinyl samples of India's musical past. It sometimes seems to be an exercise in/exorcism of Indian cultural memory, reminding me of Mexico's ruidosón genre. Sawhney is a filmmaker, so it makes sense that his music evokes an imaginary scene of local apparitions cinematically floating around a dance. Today marks the release of his four-track In Hi Ko EP. It progresses from loungey (“In Hi Ko”) to industrial (“Agnee remix”) to funky (“Tofah”) and finally to shimmery disco (“Irraadon”). https://www.facebook.com/lifafatunes