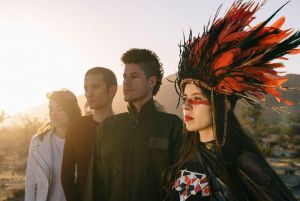 "strong/ENOUGH" is the new song from the forthcoming Le Butcherettes album bi/MENTAL, produced by Jerry Harrison of the Talking Heads and set for release on Rise Records in early 2019. You can stream it here.

Following three albums produced by Omar Rodríguez-López of At The Drive In and The Mars Volta, a new creative approach has added a fresh dimension to Le Butcherettes’ sound.  Equal parts cerebral poetry, art assault, and primal punk cacophony, the 13 tracks on the upcoming LP represent the Guadalajara-born and El Paso-based group at its most incisive and infectious.

An infamous live force, Le Butcherettes' frontwoman Teri Gender Bender has defied house rules (and gravity), hanging upside down from the rafters at a storied Coachella set followed by stage-wrecking displays everywhere from Lollapalooza to Fun Fun Fun Fest. Handpicked to support the likes of Jack White, At The Drive In, Faith No More, Yeah Yeah Yeahs, Deftones, and more, Le Butcherettes earned the blessing and anointment of rock’s vanguard. The singer has previously joined iconic Garbage leader Shirley Manson and Brody Dalle on the cover of Nylon, while Iggy Pop, Henry Rollins, and John Frusciante have all collaborated with the group.