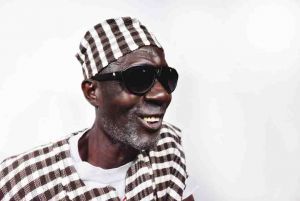 Growing up in Milwaukee in the ‘80s, Sierra Leonean-American DJ, producer, and writer Boima Tucker discovered the music of his father’s continent during lively New Year’s Eve parties his parents threw in the basement of his childhood home. Tucker, who makes music as Chief Boima, still has vivid memories of hearing Congolese soukous and Ghanaian highlife pulsing throughout the house. However, it didn’t immediately catch his ear: “For me it was always old people’s music,” Tucker tells me today, speaking via Skype from his home in Rio de Janeiro, Brazil, where he’s lived since 2014. His locs are tied in a bun behind his head and a dark hoodie hangs over his shoulders. Growing up as a first generation immigrant in the midwest wasn’t easy, and therefore connecting with his African roots took a backseat until Tucker left Wisconsin for San Francisco to explore new opportunities in 2004. Seeking the food and community of his childhood, he stumbled across a bar named Little Baobab, run by Senegalese owners from Paris. There he heard the music his father used to play alongside something new: coupé-décalé, an Ivorian dance music created by immigrants in Paris based on the fast-paced zouglou and zouk music of the Ivory Coast and the Caribbean. This new African sound was a revelation to Tucker, “the hip-hop version of my father’s music.” Taking up a DJ residency at the bar, he realized he could create his own black identity rather than the African-American one forced upon him. An identity defined by “a mix of immigrant places,” through which he could articulate the world around him.