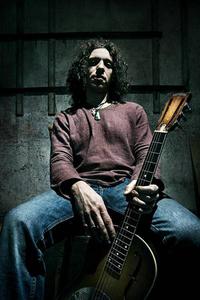 Energetic, gifted, ambitious, charming and artistic: these are just a few words that spring to mind after listening to John’s debut album Joys Of Spring. After much acclaim and plenty of jaw-dropping live shows John has established a reputation for being one of the most intuitive and creative musicians the UK has to offer. Yet it is John’s extensive travelling and raw musical experiences which have truly informed his eclectic taste and technically awe-inspiring live shows. Having met Indian Sarod master K. Sridah 25 years ago John was instantly inspired by his musical fluency, rare intensity and exciting links with musicians from other cultures. A few years later, and John headed to South Asia and beyond to develop a fearsome live reputation around the world. While working alongside Maori gangsters and playing slide guitar in Bangkok blues bars, John committed himself to a life of music reflecting different genres, moods and personalities that when performed live is perfectly woven together by the powerful thread of John’s outrageous guitar playing talent. After returning from his travels, John set about distilling all he had learned, pouring all he had learned into a melting-pot of an album, the stunning Joys of Spring, steeped in a sense of the worldwide music community. This beautiful debut has seen John hailed as a “one man explosion of blues, Indian ragas and baroque folk”, which in turn has propelled John into more mainstream circles, earning him the opportunity to perform in front of audiences who wouldn’t normally get the chance to encounter such wonder. Over the last year John has played over 100 stunning live shows across the globe. This year’s UK festival season saw John perform four times at Glastonbury and each night at the Edinburgh Fringe Festival, as well as shows at The Great Escape, Venn Festival and finally at End Of The Road Festival with a show-stealing performance in the Bimble Inn. With countless more shows to come John will continue to take new audiences through a range of psychedelic landscapes, challenging the listener with melodies, arrangements and foot stomping rhythms that haunt you long after they are experienced. www.johnfairhurst.co.uk www.myspace.com/johnfairhurst