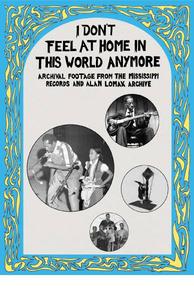 film, music and aural presentation by Eric Isaacson of Mississippi Records, Portland, USA. Featuring archival film, images & stories spanning 1890 to the present day, illustrating Eric's own special history of underground music movements and bonafide individuals. The live footage performances are culled from Mississippi Records' enormous library of folk blues, gospel, esoteric, international & punk music, and courtesy of the Alan Lomax Archive's “American Patchwork” video collection, shot throughout the American South by the folklorist between 1978 and 1985. The Lomax footage is being provided by the Association for Cultural Equity as part of their continuing effort to make important cultural information available to all who seek it. Rare film of musicians associated with the Mississippi Records label such as one man band Abner Jay, angel channeling Bishop Perry Tillis, Rev. Louis Overstreet & his four sons, legendary folk singer Michael Hurley & many more will be featured.. Each film segment will be introduced with brief stories about the musicians. There will also be a short slide show that tells the story of the underground music industry & Mississippi Records. The endless cycle of conflict and incident that exists between the subterranean and marginalised music scenes and the mainstream music industry will be explored by Eric without using language or images associated with simplified boring dogma, slogan chanting or political rhetoric. Mississippi Records, in a short time, has bypassed most antiquated record label conventions and has, through a few guiding principles and great taste, gained cult status, lots of sales and love and praise from all quarters. Watch this for a taster: http://vimeo.com/63266123