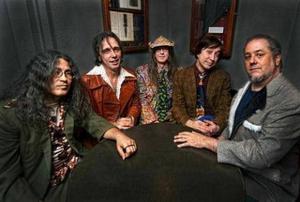 HE HICKOIDS (Cow-Punk-Glam from Texas) Hell, let's just cut to the chase right) at the outset. The Hickoids defy easy and neat description, or even messy description, though “messy” was often applied to the band's members and their shamelessly uninhibited punk rock run for the wilted Texas yellow roses from 1985 through '92 — one of the mildest descriptions, in fact. The tags hung around their scrawny and unruly necks like name and number slates in arrest photos include but are hardly limited to cowpunk, white thrash, glambilly, hard-corn, psychobilly, hick rock, acidbilly and out on bail. All in a way apply, but none and even the sum of those terms do these magnificent musical reprobates full justice. To truly “get” The Hickoids as they were in their original wild, wooly and damned loud and raucously ragged magnificence, combine tequila with beer chasers (not the other way around), psychedelic shrooms, demon musical seeds spewed by The Sex Pistols, The Ramones and Iggy & The Stooges, honky-tonk and “Hee Haw,” hay bales scattered in the air, power chords and toxic twang galore, battered cowboy hats and tattered thrift store dresses, and their Austin hometown in all its late '80s cheap rent/booze/pot/living slacker splendor. That'll give ya a bracing taste of what was and now, nearly 20 years after they sputtered to a halt, returns anew. Or simply mix the notions “Texas” and “punk rock,” multiply that to the Nth exponential, and shake vigorously. Voila! Hickoids. http://www.hickoids.com/