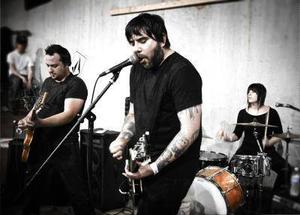 I am often at a loss for words when I come up with albums that have this approach to garage punk rock. Maybe is the simplicity of the music or maybe is it that I like the style so much (and therefore I may be bias) and know so little about their scene (or whether there actually is one) that I often feel as if I can't represent the albums in question with the accuracy and objectivity desired. Regardless, I am already getting into the bad habit of running out of good things to say about bands as great as this Austin, TX trio, who I have actually found to have been dubbed as the 'best garage band in the city' by quite the reputable site. And we all know how musical all those Austinites are. So to get to the point; The Hex Dispensers are powerful, and know very well their chords and know exactly when to strike them for full effect, and know how to arrange them to make hook-laden two-to-two-and-a-half quickies. In the case of the greatness of The Hex Dispensers, there are two elements that make the band; the voice of Alex Cuervo; (judging by this album the man is also quite the talented and prolific composer and also a former member of This Damn Town and The Brotherhood of Electricity) who sings as well as you and/or me but like the voice of a Joey Ramone, his vocal and syllable inflections are damn infectious and are delivered with caffeinated energy. The way Cuervo sings his lines in the standout (and I mean standout of an album full of 'em suckers) “Forest Ray Colson” is pure liberation in the garage rock sense of the word. Meaning that it gets you moving like you are a fanatic, and you don't even notice it. The second thing being the guitars; fast melodic riffs racing (“H.D. Local 23”) through the streets in a night of urban debauchery. Some of 'em are damn first grade type stuff (“Are You An Assassin”), but that's what is all about here; doing the most of with what you have. Looking back at the last lines, it is obvious I didn't really have shit to say, nothing but good things anyway. Guitars and vocals, I fuck! Guitars and vocals are basic everywhere. www.myspace.com/thehexdispensers