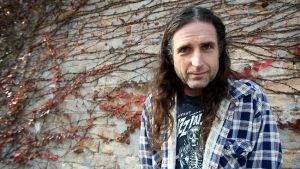 PETER Black was named one of the country's best guitarists last month. But instead of living the rock 'n' roll lifestyle, Black has to rely on his fans' generosity after he was assaulted in the taxi he drives to make ends meet. The musician with the Sydney band The Hard-Ons was left with a fractured skull and a swollen brain and suffers vertigo and nausea after he was bashed, allegedly by two teenagers who hailed his cab in Crows Nest on May 18. After picking up the "two kids" in the early hours, the next thing Black remembers is waking up in hospital. According to a police report, a 16-year-old boy allegedly punched, kicked and repeatedly hit him over the head with a skateboard. "I'm pretty much not allowed to do anything for a few months," said Black, who has driven a cab for seven years."No driving. If I move my head too quickly I get mild vertigo, nausea. So no head-banging for a while. "I've got 16 stitches in my mouth too, so it could be kind of hard to sing. "What else can I do? I love playing music and being a cabbie is the best job for a musician." He said it was "stunning" that his friends and fans were helping him out. After an appeal by his friend and bandmate Ray Ahn, fans have donated money to cover Black's living expenses until he is well enough to get back behind the wheel again - or tour. "It is tough," Ahn said. "You look at all the other guys on the top 50 Australian guitarists list, and how many of them have to drive a taxi to live?" Ahn and other Sydney musicians are also organising benefit shows next month to help raise money. "Unfortunately I'm not allowed to go. The loud noises are probably not too good for my head," Black said. A youth, 16, has been charged with assault occasioning actual bodily harm and was bailed to appear at Hornsby Children's Court on June 21. His 14-year-old girlfriend is being dealt with under the Young Offenders Act.