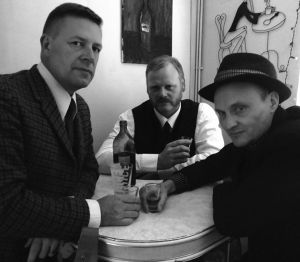 The Prisoners were part of an extraordinary, tiny, but highly significant, explosion of energetic music coming out of the unfashionable Medway Towns in the early 80s.

They shared a conviction that crucial elements of what made rocknroll exciting were being forgotten or discarded in the rush towards a polished, electronic, video-age modernity....

The Prisoners formed while all the members were still at school. After a couple of false starts, singer/guitarist Graham Day and bassist Allan Crockford were joined by Johnny Symons on drums and later Jamie Taylor on organ. Brought together by a love of punk rock and its 60s garage-rock antecedents, they quickly built a reputation as a ferocious live act. In 1982, still in their teens, they blasted out their own self-released album A Taste Of Pink, inspired by the DIY punk ethos locally personified by The Milkshakes.

With almost no direct peers, their early London gigs saw them awkwardly paired with garage and psychobilly bands, and lumped in with a more loosely defined neo-psychedelic movement. But The Prisoners were never part of any cosy little club. Unfairly derided at the time as ‘revivalist’ (what would now be called ‘retro cool’) the Prisoners were actually keeping alive values that later became common currency. i.e. recording as a live band sounds pretty good; old guitars and valve amps sound better than modern ones. In the early days the paisley trappings were there of course, but The Prisoners were always about the substance way more than the style. The classic songs were churned out too. With a surly, swirling delivery, full of don’t-care energy, The Prisoners made you care. And they made you dance, unlike most of the pale and interesting indie bands of the era.

The Prisoners were also a major inspiration behind the Charlatans and the Inspiral Carpets and their contribution to the (whisper it) Madchester sound. That instantly turned the revivalist charge on its head and, in retrospect, made the Prisoners suddenly sound ahead of (rather than behind) their time.

The band split in 1986 after four albums and the sadly inevitable music-industry-induced agony, but the Day/Crockford partnership didn’t stay dormant for long. After a stint as drummer for the Mighty Caesars with Chatham’s very own Renaissance man Billy Childish, Graham Day was re-joined by his old partner in 1989, along with ex-Daggerman Wolf Howard on drums, and formed the Prime Movers. Allan and Wolf had been part of the original line-up of the James Taylor Quartet (formed after the Prisoners split), but were now free agents. The Prime Movers recorded the raw and unpolished ‘Sins of the Fourfathers’ as a three piece, and were soon joined by Fay Hallam (ex Makin’ Time) on organ. Two subsequent albums followed but the band called it a day in 1993.

In the mid 90’s Graham formed Planet and released an album on Acid Jazz, while Allan and Wolf recorded and gigged with Goodchilde. Meanwhile interest in The Prisoners legacy was growing and following the first CD re-releases of the band’s original albums, they were persuaded to reform for occasional gigs. A one-off single followed, but when an attempt to record more new Prisoners material foundered, Graham was left with a batch of unrecorded new songs and no band to play them. The Solarflares were the answer, re-uniting the trio of Graham, Allan and Wolf in 1999 to record ‘Psychedelic Tantrum’. Following the template set by both The Prisoners and The Prime Movers, the latest incarnation started as a trio, recording two albums before being joined by an organist, this time Parsley Lion, for a further three albums. The Solarflares output is regarded by many, including the band, as amongst the best material released by any of their various incarnations. The trio/quartet toured extensively in Europe, enhancing a now considerable international live reputation, but The Solarflares eventually called time in 2004. Graham and Wolf continued playing together in The Buff Medways with Billy Childish until 2006.

In more recent years the fans have been kept happy by Graham Day and his Gaolers, and Allan Crockford with The Galileo 7. But the exciting news of 2013 is the renewal of the Day/Crockford/Howard trio. After a handful of dates as the Prime Movers, the now rechristened Graham Day and the Forefathers are unashamedly pumping out the best material from all the line-ups, including the Prisoners, with an uncompromising verve and energy, undiminished from their earliest days.