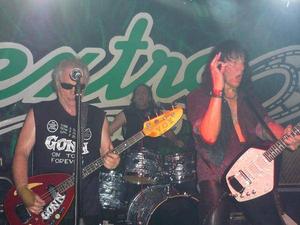 The all-original 1967 line-up of GONN will tour the UK & Europe for 2 weeks, beginning June 18, 2009. Shows on deck thus far include London, Paris, and Torino, Italy, with a dozen others to be announced shortly. Craig Moore (bass/vocals/screaming), Gerry Gabel (organ/vocals, the voice heard singing "Blackout Of Gretely"), Rex Garrett (lead guitar & fuzztone), Larry LaMaster, rhythm guitar, and Dave Johnson (drums), will be hammering home 90 minutes of roof-rattling 60's punk exactly as they did 40+ years ago, back when it was simply called 'rock 'n roll'. There are precious few all-original 60's garage bands to be seen these days, and this will be a show not to be missed. UK shows will also feature new-generation-garage rockers FLIGHT 13 from Doncaster, Yorkshire, with guitarist/vocalist Bob Hughes, veteran of the FUZZTONES GONN PRIMITIVE TOUR in October & November of 2008, with Craig Moore (GONN), Rudi Protrudi & Mike Czekaj (Fuzztones), and Lana Loveland (Bonniwell Music Machine), so it will be a fun reunion of sorts, as well as a night crammed full of original American garage rock & psych. GONN music permeates the universe via LP & CD currently in print on the Sundazed 'Loudest Band In Town' LP and Rhino's legendary 'Nuggets' box set, and has previously circled the globe via the Bomp /Voxx LP, the UK 'Pebbles' box set, "Frenzology" & "GONN With The Wind" CD's, countless bootlegs and '45's & EP's. NOW available - the brand new "GONN For Good - Best Of 1966-2008" CD that includes the best studio tracks, live reunion recordings, and an otherwise unavailable 2008 cover version of The Fuzztones' "Shame On You". (All available via this myspace page). Live footage of GONN & Craig Moore at various US shows are scattered around youtube, and if you search youtube by enetering 'Fuzztones Gonn' you will find many audience postings from that fall tour. But THIS will be the show to see in Summer 2009! www.myspace.com/gonn66