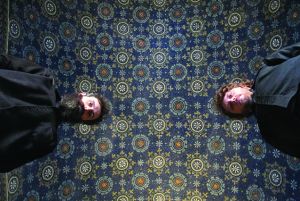 After their debut on the "AGGARBATOO Vol. 1”, split-tape with Belokurov VS Marziano and the first S/T CD (which came out in an amazing packaging made of steel and wod and limited to 100 copies), they finally release a full-lenght, out on vinyl and co-produced by Lemming Records and NO=FI Recordings.

This album comes as a long impro suite, divided on 2 Sides, inspired by the Kepler's cosmograpger mistery and his conception of celestial-harmonic relationships, based on geometrically supported musical ratios: an interesting and original mix of Free-Avant Rock, 70s Prog, Kraut, Library Music and an Italian Soudtrack aftertaste. Common ingredients and interests of the so called Italian Occult Psychedeliascene. And this is a masterpiece in his genre!

It's pressed on clear vinyl and it comes into screenprinted PVC bags: artwork inspired by the Kepler's theory and made by Re Delle Aringhe.