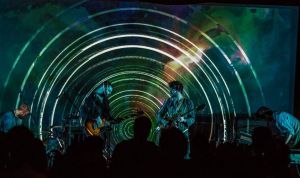 Electric Eye play droned out psych-rock inspired by the blues, India and the ever more expanding universe. On the bands inspirational mix tape, you will probably find songs from the The Black Angels, Wooden Shjips and Pink Floyd in Pompeii. With members from some of Bergen’s foremost underground bands, a couple of spectacular songs and live shows, the buzz about Electric Eye swiftly spread from Norway to music fans world wide. Electric Eye released their debut-LP “Pick-up, Lift-off, Space, Time” in April. The album received rave reviews in the Norwegian music press, and has over the last few months spread to blogs and radio stations all over the world. The album was a co-release between Norway's Klangkollektivet and London based Fuzz Club Records, who put out “Pick-up, Lift-off, Space, Time” in both the UK and US. After the release Electric Eye have toured Scandinavia and the EU, appeared at several Psych Fests across the continent. They performed at the Iceland Airwaves Festival, Eurosonic Noordenslag, and will play SXSW in March.