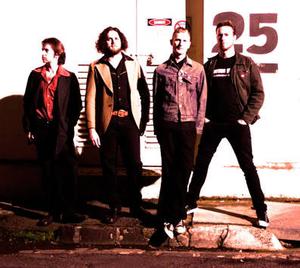 By taking the low end guitar heavy elements of stoner rock and merging it with a keen ear for a catchy hook Don Fernando are showing that heavy music can be combined with a pop sensibility to create something unique and exciting, the music is heavy, the guitars are about as loud as you could possibly imagine and their gigs will leave you planted firmly on your arse while humming their melodies and lamenting lost love. Having relocated from Sydney to Melbourne in early 2008 the band immediatly started to find their feet in Australia's home of Rock playing to a steadily increasing fan base of rock devotee's. With reviews of the live show describing them as "explosive, tight and thought provoking" and "as tough as they are rockin, Don Fernando demand your attention" It was not long until they followed up their debut EP "Its Good While it Lasts" with a debut album ("The Banquet of...") that would position them amoung Melbourne's Rock elite. The album has been recieving airplay Australia wide on Triple R, PBS and Triple J and has recieved glowing reviews in some of Australia's biggest rock magazine's, BLUNT magazine even added the single "Release me Now" onto a compilation CD which went out to all 25 000 readers. With all this behind them Don Fernando are not content to rest on their hometown success, with European distribution and their first tour of Europe all locked in for Jan 2010 the future looks bright. www.don-fernando.com www.myspace.com/donfernandorocks