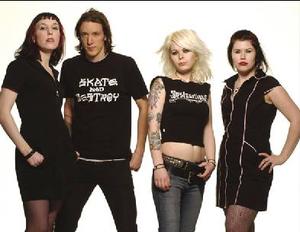 Disco Volante was formed in the year 2000 and in the spring of 2002, their debut single "Penis Envy", which included the tracks "Pocketcock" and the "undergroundhit" Big Dick Hans, was released. The single recieved very good reviews and was played at numerous occasions on Swedish Radio P3. Disco Volante have since then played about 80 gigs in Sweden, Denmark and Finland and has also opened for band such as Limp Bizkit, Dead Kennedys, Nashville Pussy and Girlschool. They have also performed at prestigious Swedish festivals such as Hultsfreds Festivalen and Arvikafestivalen. The first “official” single, “Distort The South” was produced by the famous Micke Herrström (Backyard Babies/ Thåström amongst others) and was released January 14th -2004. The single was recorded in the legendary Tambourine Studios in Malmoe. The video from the same single has been a frequent feature on the Swedish music channel ZTV and it has also been showed on Musikbyrån at Swedish national television. The song has also been on rotation at Swedish Radio P3. www.discovolante.nu