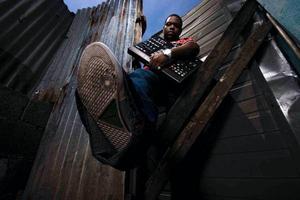 Demarco represents the refined cream of a modern crop of Jamaica’s most skilled and talented music practitioners. He embodies a new age of cutting-edge artistes, whose ability to intertwine song writing with music production, engineering, and performing, and whose capacity to use these skills seamlessly between Dancehall, Roots Reggae, Hip Hop, and R & B, makes him in constant demand in one role or another. He has either written, produced, or built tracks for some of the world’s most popular figures in music. Top names like singer/rapper Olivia, rapper Styles P and deejay Sean Paul have experienced his production skills, while deejay Bounty Killer and others have put vocals to his cutting lyrics. www.myspace.com/demarcotheartist